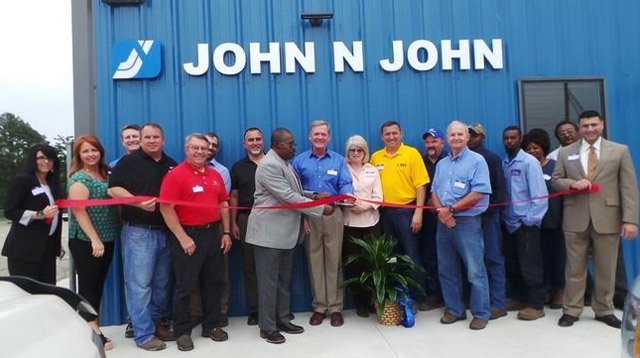 John N John, a Crowley based company, hosted a grand opening, a Morehouse EDC ribbon cutting and crawfish boil at its new terminal location on North Washington Street in Bastrop. The business is the first to establish a regional service center on property that was previously part of International Paper’s property.

“After leasing for a couple of years, they decided to build a permanent building and finally selected this location in Bastrop,” Kay King, Morehouse Economic Development Corporation president and CEO, said. “The site is part of the International Paper Mill property where wood was received.”

According to owner William M. John, John N John actually provided trucking services to the old milk carton plant and being present in Bastrop now allows the company to be part of an exciting time in the city’s history.

“Bastrop feels like a Phoenix,” John said. “It was bustling, and then it went down [with the mill closure], but now it is coming up from the ashes.”

When asked why Bastrop and this site were chosen, John credited Kay King,

“It has a lot to do with Kay King,” John said. “When we first started looking for a location, she ran with the ball. Originally, we started leasing property with three trucks and a mechanic. Within about two years, we outgrew that facility and began to look for an existing location or a place to build.”

Since starting the Morehouse Parish terminal, this John N John location has grown to include 30 drivers and three technicians, and John credits his employees and the community as a driving force behind the growth.

“What is really cool about this area is the work ethic of the people,” John said. “We have people who are willing and able to work. You can have a building and property, but you are nothing without great employees.”